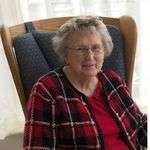 Ada C. Nason, 82, passed away peacefully on Tuesday, February 20, 2018. Her family thanks all those at Bridges by Epoch at Nashua and Brookhaven Hospice who provided her with great care.
Ada was born in February 28, 1935 in Charleston, ME to Fredrick and Beryl (Dyer) Clement. She was married to Eugene Nason for 57 years until his death in 2010. They began their life together in Connecticut raised their family in Bristol CT, built a lake house...