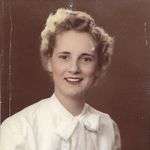 She was born in Freedom, ME on April 20th, 1922, and was never one to stand still. She often worked at her father's sawmill moving logs as a kid. She worked at Raytheon in Waltham during WWII assembling parts for radars. This is where she met her husband, Stearns Porter. Little did he know, he'd be married to...