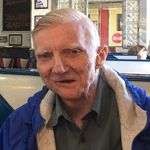 Charles A. Clevesy Jr., 84, died on October 5, 2018 following a two-year battle with cancer. He was born in Haverhill, MA on March 16, 1934 to Charles and Louise (Porter) Clevesy, Sr. He lived in Derry, NH for 30 years before living one year at Villa Crest Nursing Center in Manchester.