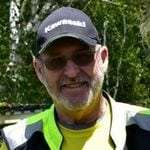 Daniel J. Reardon, Jr. died March 18, 2018 at the Bedford Hills Nursing Home after a courageous battle against cancer. Danny was born June 22, 1943 at the Alexander Eastman Hospital in East Derry, NH to Daniel J. Reardon, Sr. and Annette Senecal Reardon of Derry. Danny attended Pinkerton Academy and graduated with the class of 1961. Danny served in the U.S. Navy and was on the Aircraft Carrier that picked up Alan Shepard after his first flight...