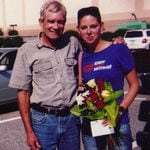 Gerald "Jerry" Michael died peacefully on Thursday, March 8, 2018 after a long illness.
He was born on January 16, 1954, in Columbus, OH, the son of the late Edwin and Ruth (Croft) Michael.
Jerry worked many years at Mr. Gee's as a mechanic as well as at Gary Chacon Builders.
Jerry was an avid Boston sports fan and especially loved watching the Celtics.
He is survived by his daughter Erin Gullage and her husband John of Billerica, MA and...