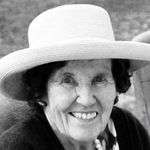 GWENDOLYN HOLLY SWOPE
September 18, 1930 - July 30,2018
Gwendolyn Holly Swope passed away on July 30, 2018 in Nashua, NH after an extended illness. Holly was the beloved wife of the late Warren L. Swope of Milton Mills, NH. They relished their many years living abroad with the U. S. Department of State before retiring to NH. She is survived by her three daughters, Judith H. DeHart and her husband Damon of Bedford, MA; Gwendolyn (Wendy)...