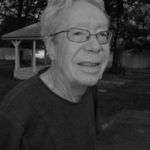 James P. Murphy 74, of Exeter, passed away peacefully on Thursday November 23, 2017. He was born on June 5, 1943 in Worchester, Massachusetts to Charles and Elizabeth (O'Neil) Murphy.

Jim attended Commerce Regional High School, Worchester, MA. He then worked at Pierce Leather for a few years. He went into the Army in 1965 and was trained in Morse Code. He was honorably discharged to support his sisters and his mother, as he was the only son....