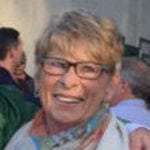 Though she worked in banking at Laconia Savings for a period of time, JoAnn was primarily a...