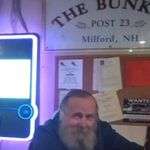 Lane Robert Whitney age 70 died on December 31, 2019 at Home Health & Hospice Care in Merrimack, NH. He had many health issues last being a broken Disk in his back. That he made the decision to have major surgery, which lead to his decline in health. He was born in Nashua NH June 18,1949
The Son of: Earl H. Whitney Peterborough NH Mother: Germaine R Whitney Maiden Name: Caouette (Deceased)
Lane Graduated from: Wilton NH high Class of 1967, He...