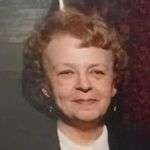 Mary Thelma (O'Brien) Nicholas 94 of Brattleboro VT died on May 31, 2019, at Pine Heights Nursing Home. She was born on July 23, 1924, in New Haven, CT, the daughter of Dennis and Thelma (Harrison) O'Brien. She became a resident of Brattleboro in 1937, and attended Brattleboro schools. She was employed by Holstein Association, Estey Organ (where she made bomb boxes), Montgomery Ward, Sterling Drug, Brattleboro Vending Co., Food Service Manager...