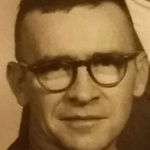 Richard is a retired veteran of the United States Air Force where he was stationed at several US military installations including: Langley AFB, Suffolk County AFB, Air Force Academy and Pease...