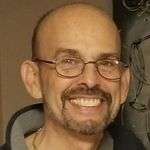 Robert "Rob" Lewis Holden, born November 6, 1961, passed away Wednesday, July 8, 2020 peacefully at his home in Hudson, NH surrounded by his loved ones, after a courageous 2-year battle with pancreatic cancer. He was the son of Robert A. Holden and the late Suzie Scemama Holden and is survived by four children, Jason, Sarah-Fay, Kelly, and Michael and several grandchildren. He was the oldest of 6 children; sisters, Debbie Anne, Debbie Marie,...