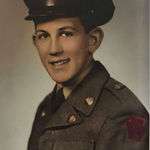 Roger LaBranche, 85 of Farmington, NH passed away on Thursday, April 4, 2019 with his family by his side. Roger was born in Lawrence, Massachusetts in 1933 and grew up in Newmarket, New Hampshire.

Having enrolled in the United States Army at the age of 17, Roger proudly served our country as a Staff Sergeant for the 109th Infantry in Germany during the Korean War from 1951 - 1953. After returning from service, he spent some time in Simi...