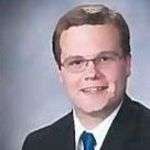 Sean was born on September 6, 1992 in Saratoga Springs, New York to Robert and Tonya Curtis. He was a member of the Corinth first Presbyterian church. Sean graduated from Corinth High School in 2010, from Saint Anselm...