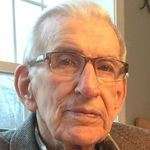 Stephen Aloysius Mack passed away on December 8, 2017. Born October 30, 1921 in Woburn, MA to the late Max F. and Josephine (Murray) Macalouski. He was the husband of Patricia Mack of Atkinson, NH.

Steve enlisted in the army during World War II. He attended Officers Training School at Fort Benning, Georgia and saw action as a Second Lieutenant and Company Commander in the European Theater of Operation in the 106th Infantry Division. Steve...