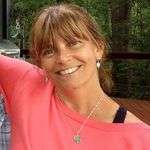 Suzanne Maureen Klink, born on August 20, 1957 to George and Dorothy Vicary, and residing in Nashua, New Hampshire, passed away peacefully on January 12, 2019 after a 3-year battle with cancer.
Suzanne grew up on Afton Lake in New York, and married college sweetheart, Bruce Klink. Known as "Toot" by her family and closest friends, her nickname for some reason was not adopted by friends made after she married.
To suggest that Suzanne "succumbed...