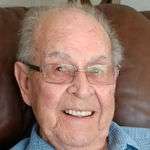 Walter (Wally) Ludger Jalbert died on February 10, 2020. Wally was born in Nashua, NH on 3/14/1927 to Walter and Lillian (Kerouac) Jalbert. He attended Nashua schools and worked many jobs in Nashua until entering the Merchant Marines in 1946. He later enlisted in the Army in 1951 during the Korean War. He married Joan Raymond in 1952. Together they raised three children in Hudson, NH. He worked for PSNH in the Nashua office for 34 years and...